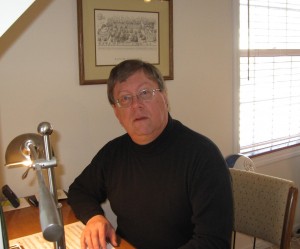 Brian Kershner, composer and bassoonist, has received enthusiastic performances of his works internationally.  The Sonata for Bassoon and Piano (1989) and Contours, Canons, and Caricatures for saxophone quartet are available on CD on the Vienna Modern Masters label.  The latter won a special commendation from the judges in their 1994 VMM competition and is published by Roncorp, who also published his piece for unaccompanied clarinet, Conundrums, Aftermath, a character piece for bassoon and piano, and more recently, Alliterations for bassoon and marimba. Strata, (1998), a suite for wind ensemble, is available on a Mark CD.  The composer’s violin concerto (2004) was composed for Lenuta Ciulei and the Romanian National Radio Orchestra.  Ms Ciulei has also championed Dr. Kershner’s Pastorale and Scherzino through multiple performances in Philadelphia and Rome, Italy.  His New England Trio (2005) was premiered by the Connecticut Trio (a piano trio) in Weill Recital Hall, Carnegie Hall, NYC in April of 2005. He was awarded a ASCAPLUS Awards in 2007, 2008, 2009 and 2010.. His song cycle, Leaves of Grass was a finalist in the 2008 Art Song Competition sponsored by the National Association of Teachers of Singing.  It was subsequently published by Classical Vocal Reprints, who also published his Dickinson Songs for Soprano, Oboe and Bassoon in 2008.  Dr. Kershner presented the international premiere of his new work, Bagatelles for Clarinet and Bassoon in the United Kingdom in July 2009 at the annual convention of the International Double Reed Society.  Other recent works include a string quartet, “Like the creatures we’ve become…”, two works for Trio d’Anches, a sonata for cello and piano, and a second wind quintet.  His new orchestral work, On Fertile Ground musically deals with the climate change debacle while depicting the great beauties of our planet at the same time.

As a bassoonist, Dr. Kershner is known throughout the United States as a performer and teacher.  He had been Principal Bassoonist with New Jersey’s Riverside Symphonia since the orchestra’s inception, only recently resigning to devote more to work in Connecticut.  He has performed with Concerto Soloists of Philadelphia, Opera Company of Philadelphia, Jupiter Symphony in New York, Manhattan Chamber Orchestra and New Jersey Symphony. Dr. Kershner has been a frequent invited performer at conferences of the International Double Reed Society, including a recital of his own works for bassoon and 2003, and again in 2007 performing his Emily Dickinson Songs for Soprano, Oboe and Bassoon

Brian Kershner is currently Associate Professor of Music at Central Connecticut State University in New Britain, CT.  He has previously served on the faculties of Rutgers University, Baylor University and University of North Carolina at Greensboro.